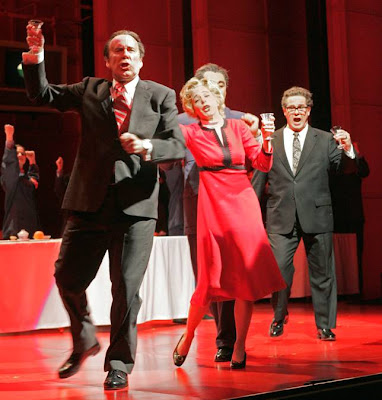 The "Live in HD" season of the Metropolitan Opera brings their large scale productions into the popcorn soaked corners of multiplexes and movie houses across the country. Offering an oasis within an environment of mainstream Hollywood fare. Posing the questions: does it make sense to applaud an aria within a movie theater? Would the maestro be slighted if I don't participate in a standing ovation?

The decision to conduct interviews with the star performers, the composer/conductor, the choreographer and director over the course of the two intermissions reduced the experience to a sporting event. Such interviews felt out of place within the normally introspective spaces within a performance. I couldn't help feeling that such external reflections belonged at the end of the experience as opposed to adding to an already four-hours sensory bombardment. That said, the quality of the interviews ranged from insightful to awkward.

The production itself was world class. The sets and costumes were outstanding. And the dance choreography was fantastic. It was the composition of Nixon in China that fell flat for me. I've noticed that John Adams has built a career upon taking compositional ideas from other composers (borrowing heavily from the language and sound of Philip Glass's Einstein on the Beach for Nixon in China or lifting from Charles Ives's Central Park in the Dark in My Father Knew Charles Ives) and heavily diluting the sound. Gone were the additive processes and static elaborations of Glass. All the sharp corners and dissonances filed down to a consonant sheen. To be fair, even Glass himself has diluted his own ideas in the wake of Einstein on the Beach. It is clear that the watered down versions of this material does make it more widely accessible. But it leaves these ears hungry for the less compromised originals with the spices left in.

With Nixon in China, the diluted material wears out its welcome long before the incredibly disappointing third act. Once the set was reduced to a set of six beds and the principle characters were left to ponder what they had done, the "substance" of the music itself was unable to sustain the dramatic energy. I also think that the real world characters of Richard Nixon, Chairman Mao and Henry Kissinger require a far less sympathetic portrayal as figures who were ultimately on the wrong side of humanity. The interviewees of the two intermissions declared Nixon in China to be a modern masterpiece. I disagree. It is an opera that strikes a nerve with the here and now. And then gets on those nerves with its sticky sweetness.
Posted by Unknown at 2:16 PM