HurdAudio Rotation: Rhinoceros is My Profession 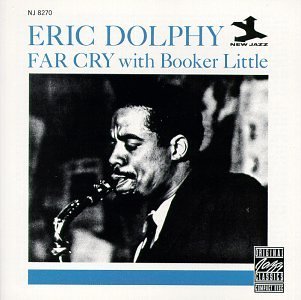 This record takes on a particular luminescence with presence of its two tragic headliners.  Booker Little developed his sound and left us documentation like this even as he never lived to see his 24th birthday and Eric Dolphy was gone far too soon just four years after this recording date, leaving us at age 36.  And yet the creative spark they left behind on Far Cry continues to burn, leaving an important statement about jazz tradition and how there is always room for the individual to plumb its revolutionary angles.  Opening with "Mrs. Parker of K.C." and its interplay of bass clarinet and trumpet and segueing into "Ode to Charlie Parker" with the interaction between flute and trumpet this 1960 set is no historical curiosity.  It is a vibrant thing that remains fresh more than half a century later.  From there we get the classic Dolphy originals of "Far Cry" and "Miss Ann" as the hard bop/free jazz gauntlet is thrown.  The rhythm section backing up these flights accounts for much of the burn and scorch found here with this being the recording debut of the great Ron Carter on bass with Roy Haynes on drums and Jaki Byard on piano.  The deep impression left behind by this record is not diminished by its brevity.  There is much to stimulate the ears in less than three quarters of an hour, a set duration that reflects the frustratingly short period of time these players had to set the jazz world on fire.  Admiring what they did do while aching for what might have been, this record occupies the same hallowed ground as John Coltrane's A Love Supreme or Miles Davis' Kind of Blue as one of the stand out recordings of a jazz language that is far richer because of the contributions found here. 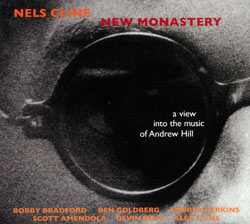 The most striking thing about this particular "view into the music of Andrew Hill" is that you can cleanly plot the lines between the source of inspiration and the music found on this set.  The extreme magnification that forms the cover art for New Monastery is an apt representation of the compositional and improvised energy that makes up this recording.  Sharp details of Andrew Hill's sound are expanded upon as a sonic universe is explored within pockets of the larger landscape of Hill's music.  The degree of inspiration is entirely understandable.  Making this a recording well worth revisiting.  Hearing this ensemble's take on "Dedication" is a particular thrill as the notes of the familiar opening take shape leading into the deliciously introspective improvisation that Nels Cline adds to this durable piece. 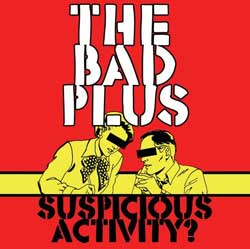 A jazz trio record brought to you by a generation that has internalized the best qualities of concept albums.  The sequencing of these polished gems is every bit as thrilling as the individual moments of groove heavy bliss that pour out from this recording.  Much has been written about the way The Bad Plus plays covers.  So I'll just say that this one includes the theme from Chariots of Fire and it is every bit as creative and polished as the originals found here.  Speaking of those originals, "Anthem for the Earnest" remains my fondest introduction to The Bad Plus.  Having "Prehensile Dream" leading right into it makes for a record that immediately makes the ears take notice.  This is a piano trio in the best sense.  Ethan Iverson brings a brilliant intensity to the piano.  But focus the ears on the drumming of Dave King and one finds just as much intensity and intricate detail at work.  Then there is the brilliant bass work of Reid Anderson.  There is very little here that can be called "supporting" or side-men.  This is an old friend to these ears in the rotation.
Posted by Unknown at 7:16 PM No comments: Links to this post

HurdAudio Rotation: With Enthusiasm and a Little Violence 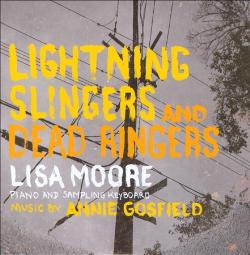 Annie Gosfield has developed a singular language that focuses on the transitory properties of sampled sound with live acoustic instruments.  And in the case of Brooklyn, October 5, 1941 strips away the electronic components to leave the acoustic exposed.  A language that favors abrupt transitions between musical ideas and a healthy dose of rhythmic groove derived from the mechanical qualities of recorded machinery.  The result is something dynamic, captivating and thoroughly non-derivative.

I heard Lisa Moore perform Lightning Slingers and Dead Ringers at a Bang on a Can marathon some time ago and was enthralled by the textures and the acrobatic feats of saddling a single virtuoso with playing the piano part and triggering samples.  This recording allows me to wrap my head around the piece as a whole and understand its structural logic.  I am happy to report that Lisa Moore still delivers a dynamic, thrilling performance for this recording and it is a work that stands up well to repeated listening as it reveals new details each time one encounters it.  It is a genuinely outstanding composition.

The addition of Brooklyn, October 5, 1941 adds a perfect coda to this set.  A short piano work that resonates like a ghost of an unheard recording of factory machinery.  Instead realized as the maniacal rhythms played upon both the exterior and interior of the piano. 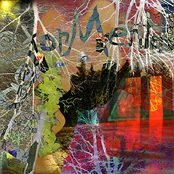 InaStorMental exists at a different extreme from Annie Gosfield.  The sonic language is anything but singular, often consisting of dense layers of multi-tracked material that pay homage to a set of influences that remind these ears of Frank Zappa and John Zorn.  While the end result is often uneven on this disc, it does manage to soar when it is good.  There is a great record lurking within this set, but it is often buried, obscured or in need of some editing.  While much of the forward momentum of this music is compelling, it often trips over itself and loses its way in tangles of texture and atmosphere.  There is much to like about this record, but there is also much that holds it back.  Leaving the ears hungry for a quality that doesn't require qualification. 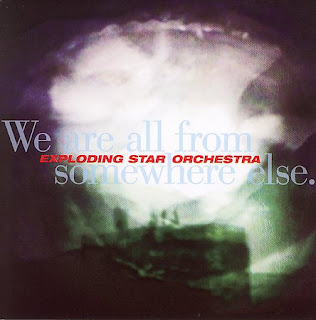 Exploding Star Orchestra: We Are All From Somewhere Else. 2007. Thrill Jockey.

True to its name, the Exploding Star Orchestra presents music with a sense of cosmic scale.  The centerpiece of this particular set is easily the Sting Ray and the Beginning of Time suite that invokes the wrath of the big bang along with the graceful agility of a swimming sting ray.  Offering searing textures that draw upon the density of a large ensemble (with two drum kits kicking out grooves) to moments of exquisite intimacy of brittle electronics or solo piano.  Rob Mazurek harnesses the creative energy of extremes and comes up with an expressive and rewarding whole for the listener willing to commit to these large, suite forms.  Imagine the creative forces of Sun Ra and Philip K. Dick unleashed upon an unsuspecting world.  Music that draws upon the creative energy of the Chicago scene and shapes it into something larger than the sum of its considerable parts.  This is an extraordinary record.
Posted by Unknown at 6:57 PM 1 comment: Links to this post