A Power Stronger Than Itself 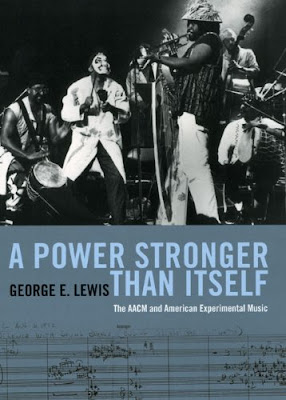 George E. Lewis: A Power Stronger Than Itself: The AACM and American Experimental Music. 2008. Chicago University Press.
By a strange twist of life's unknowable destinations this book I pre-ordered in Baltimore, finally got around to starting while living in California became my constant companion as I relocated to the roots of this book's story in Chicago. Providing a deeper understanding to a musical scene that has always held strong gravity for these ears accompanied by the palpable thrill of experiencing this living, local history as part of exploring the sonic terrain of the Windy City.
It would be hard to imagine a better writer to document the story of the Association for the Advancement of Creative Music. The impressive academic credentials of Professor Lewis balances well against his considerable clout as a member and practitioner of creative music of the highest order. This labor of profound love and discipline never loses sight of the rich story and the many personalities involved. The affection for the individuals comes through as several biographies and episodic chapters unfold a history of collectivism and sound that paints a vivid image of an organization that has survived and thrived well within and beyond the vision of its original founders. The honest assessment of the collective's successes and short comings providing an insight to the evolution of a musical movement that has infused and continues to contribute significant vibrations in American music.
George E. Lewis confronts the role, and controversies, of race and gender in avant jazz and new musics with devastating honesty. Confronting the sharp contrast in critical reception that awaited (and to an embarrassing extent still awaits) musicians who cross or blur musical genres. From speaking candidly about the indifference and disdain toward jazz held by white American composers of the early twentieth century seeking to define a cultural identity with more Eurocentric roots, to observing the lack of panelists of color at New Music Chicago's "New Music and Our Changing Culture" session in Chicago in 1982 to the long struggle toward institutional support for African-American musicians and composers. Culminating in an observation of how Anthony Braxton's music is frequently regarded as a betrayal of his ethnic roots while John Zorn is embraced for plunging musical style into the same omnivorous appetite pioneered by Braxton without being subjected to such accusations. The AACM's own evolution as an organization that admitted few women (who were often not treated as equals) to its current form with Nicole Mitchell at its helm portrays a membership willing to reflect upon their own sensibilities as it strives to correct injustices from within.
The communal impact of the long running presence of an AACM in Chicago is noticeable. I am struck by the difference in the quality of audience at new music and jazz concerts in Chicago compared to other cities. The community outreach has developed an audience that understands and respects this music in ways that are profoundly different from audience reception in Seattle, San Francisco or Baltimore. The level of diversity and engagement is striking and a testament to the positive impact this association has built up over many years. The quality of the music and the improvisers also reflects the level of development that is possible with this kind of open support structure that is in place.

Ultimately, A Power Stronger Than Itself is a much needed voice on behalf of a substantial part of the American musical landscape. George Lewis has added a new permanence to this incredible tradition by telling its story and offering an insider’s view that further realizes the high ideals that its founding members set in motion in 1965.

Hope you're planning to attend Lewis's show with von Schlippenbach next Friday.

Never thought I'd get a chance to see von Schlippenbach on this side of the Atlantic.