HurdAudio Rotation: Variations on Alone Together 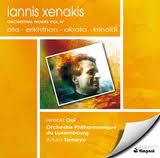 The first three volumes of this cycle leave the impression that Xenakis could wield a large orchestra like a massively dissonant, loud enterprise as he brings architecture to bear upon the musicianship of a mass of players.  On this set we find Akrata.  An early work for a relatively small chamber ensemble composed mostly of winds.  And that same forceful dissonance is there without the overwhelming means of producing it.  It is a completely riveting work, allowing the ears to hear deeper into Xenakis's language as it was still forming.  The remaining pieces are suitably large and beautifully bombastic.  A reminder of the force lurking within sound for a medium that is more often effete.  Also, the piano introduction of Erikhton is a fantastic explosion of activity that gives way to an ocean of glissando from the orchestra.  This is an important contribution toward documenting what Xenakis wrought for orchestra. 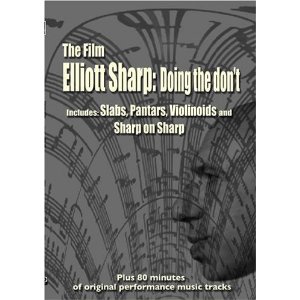 This collection of three short documentaries about the music and persona of Elliott Sharp is a perfect example of New Yorkers taking it upon themselves to document their own cultural enterprise.  Few people have been as consistently given short shift by the music press as Elliott Sharp.  Interviews are often distorted by disinterested "journalists" and reviewers are often dismissing the sonic output of this wildly eclectic figure as being overly cerebral.  Almost clownishly downplaying the significance of the music that has poured out of Elliott Sharp over the years and decades.  While some of the verbal descriptions from Sharp himself in these documentaries reveal much of the reason behind the confusion and dismissal that the mainstream has afforded him, what comes out in spades is the level of respect his music deserves.  I had forgotten how many allies his music has built up on the New York scene and loved hearing the late Butch Morris speak so enthusiastically about this body of music.  The stubborn momentum that Sharp brings to his own projects was equally inspiring.  The inclusion of performances of Syndakit, Quarks Swim Free and the archival footage of Orchestra Carbon's 1987 performance of Larynx at BAM make this particular collection a treasured glimpse into a major figure in the HurdAudio constellation. 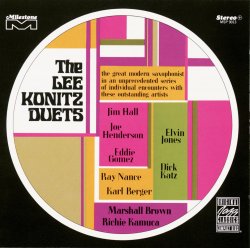 The duet format for improvising musicians has become a more common expression since the appearance of this recorded.  So the timidity found here along with the retreat to the relative safety of a rhythm section by the end of this set is understandable.  But even with the longing to hear more excursion beyond the relative safety of improvising over phantom rhythm changes and standards this remains a collection of improvisations by outstanding musicians.  Lee Konitz's mind and ear for melodic development remains nearly unequaled (Joe Henderson is clearly a peer working along side Konitz in this regard).  "ERB," the duet with Jim Hall is the most rewarding listen on this set.  The one track that plays to the strengths of  the stripped down instrumentation that gives way to sonic exploration of the keypads on the saxophone and the sound of skin along strings of the guitar.  This was an important record both for what has followed in its wake as well as the expression of masters from its era.
Posted by Unknown at 6:55 PM