HurdAudio Rotation: Even Birds Have Homes (To Return To)

It is just a few days past the ten year anniversary of this live recording and it still sounds like lightning captured in a bottle.  This particular vintage of the Dave Douglas Quintet (which has evolved into other amazing things since) is a body of music that inspires enormous enthusiasm with each listening.  And these "paperback series" collections offer incredible insight into the live manifestation of this fusing together of absurdly intelligent musicians.  Only on these live sets can one hear the sprawling, 20+ minute versions of "Penelope" and "Deluge."  It also gives the ears a chance to hear the brilliant segues between "Unison" by Bjork, "Ramshackle" by Beck and "Deluge."  The slide into each piece, often with elements of the previous and next overlapping, is fantastic.  The quotations of other great jazz tunes and sudden appearance of other forms within forms makes for rewarding listening for the alert ears.  I especially enjoyed the emergence of "Giant Steps" for a brief moment in the middle of "Deluge."  And the quick, thoughtfully realized interpretation of Douglas' thorny "Caterwaul" was a particularly engaging moment.  This is one of the great quintets operating at the top of their game and these Dave Douglas compositions are pieces to be savored and reckoned with. 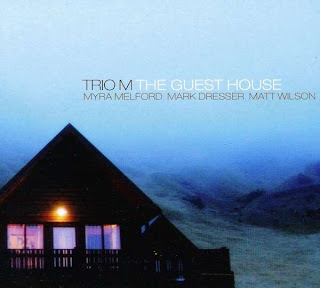 One of the unique things about Trio M is the role and stature of collaboration in realizing this music.  Each individual in this trio brings such a strong personality and presence that the sense of "shared leadership" takes on a tangible quality rarely found in piano trio projects.  One could easily regard this as a piano/bass/drums trio given the pedigree behind the collaborators involved.  Which is not to say that this music takes on a static quality.  Leaders emerge as the individual composers behind each piece and part of the fun of listening to The Guest House is hearing the clear personality that emerges as the composer for a given piece.  Even so, these players climb deep inside the music regardless of the penmanship behind the sounds.

In the linear notes, Myra Melford describes the composition of this music as a collaboration with chef Paul Canales.  Alluding to the creative impulse that is shared between concocting music and food.  Which is a fair analogy given the spice and flavor that wafts through so much of this set.  The biggest treat of all turns out to be the dessert course of Mark Dresser's "Ekoneni" realized by this ensemble.  With plenty of clarity in the unique amplification of Dresser's bass and the spirited performance that explodes as the full ensemble joins together into an infectious groove.

The Guest House is a solid jazz album first and foremost and the presence of such distinct players in rare form is hardly subtle.  Each brings a deep, mature voice and a strong sense of their own musical identity into this mix and the combination that forms is astonishing.  The mix of serious thematic materials and levity makes for a recording of rare scope that combines immediacy with lasting appeal.  Highly recommended. 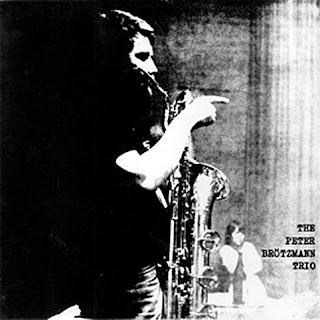 When confronted with the music of Peter Brötzmann for the first time (and "confrontation" is certainly a word that travels well with his sound) I was immediately in the thrall of its visceral, uncompromising quality and needed to know where this sound came from.  For Adolphe Sax is Brötzmann's first record.  And it appears that this sound arrived fully formed.  This is a trio of improvisers leaving angry splashes of color along a grand canvas.  And it's the spontaneity of their brash strokes of color that allows for unexpected details to emerge between the layers of dense materials.  Brötzmann's music comes with a surprising range of contrast and it's often the canyons just between his blistering sheets of sound that are the most attractive moments of his performance.  On For Adolphe Sax it's the quiet moments where Peter Kowald's bass comes through that are incredible.  Kowald and Johansson were a rhythm section capable of holding their own within this music and bringing plenty of creative energy to match.  This one is a forceful argument for why the European improvisation scene became a phenomenon that continues to influence players internationally.
Posted by Unknown at 10:28 PM