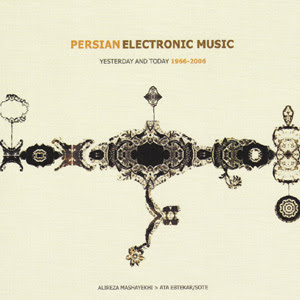 So much of the music that I actively seek out exists on the margins of the mainstream that the addition of further marginalizing geopolitical realities feels like a further, unnecessary stratification of seedlings so deserving to bloom. Such is the case with this offering of two generations of electronic music from Iran. Add this double-CD to the substantial evidence of Iran's rich cultural offerings that would overwhelm the stupid allusions to evil empires. Alireza Mashayekhi and Ata Ebtkkar weave a rich tapestry informed by their own sense of identity and how it relates to their position within the larger art music world. Mashayekhi's music presents richly developed landscapes of sound with a sense of place. Often imbued with aching beauty. Ebtekar, on the other hand, presents imaginative sonic portraits that often feature a strong melodic line with an interesting relationship to the quarter-tone harmonic language of Persian Classical music. In a more intelligent world, cultural expressions like this would dwarf petty holy wars. 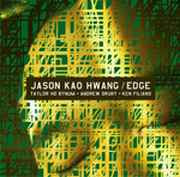 The lineup of improvisers alone is reason enough to listen to this disc. Each one is an individually strong presence in any setting and they do not disappoint in this outing. But added to that considerable quality are the extraordinary compositions of Jason Kao Hwang. Each unfolds in a flowing sequence of unsuspecting beauty with a startling mix of jazz idiomatic language and Chinese musical materials. His deep intellect and ear for detail is vividly present throughout. 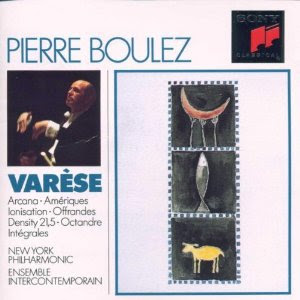 When it comes to the art music of the twentieth century, Pierre Boulez has been conducting the better part of it. Often drawing out definitive performances from orchestras and ensembles around the world. His efforts with these key pieces of the Varese catalogue are no exception. The New York Philharmonic brings a breath taking aggressiveness to Ameriques that in and of itself makes this disc worth spinning on repeat. Boulez manages to balance the biting brass section while maintaining a healthy contrast between blistering loud and retreating softness until this major work writhes and attacks like a mighty beast from the deep. If that isn't enough, these interpretations of Arcana and Integrales are world class as well. Also worth noting is the exceptional solo flute performance of Density 21.5 given by Lawrence Beauregard. Easily one of the best I've heard. This disc hints at the thrills a full on Varese Festival would deliver. This is mandatory listening.
Posted by Unknown at 11:27 PM