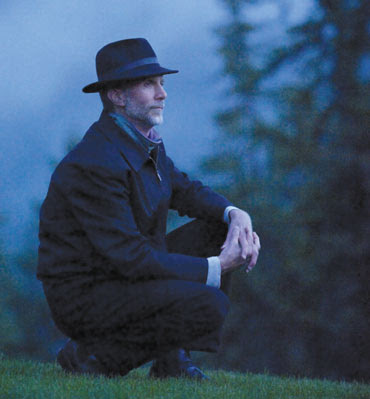 The Mathematics of Resonant Bodies (2002)

In a pair of sequential concerts the Museum of Contemporary Art in Chicago exhibited the contrasting subversive inclinations of Alaska based and inspired composer John Luther Adams. In the White Silence uses a large ensemble of musicians to produce a mere ripple of delicately tranquil sound. While The Mathematics of Resonant Bodies uses a soloist to produce an enormous din of noise. Each work striving to convey the impossible, natural expansiveness of the remote environment of the Arctic North.

In Winter Music: Composing the North, John Luther Adams includes diary excerpts from the period of time he spent composing In the White Silence. Stating "the longer we stay in one place the more we notice change." The suspended counterpoint of this concert length work reveals the rich detail found within a desolate stasis. Limited to the "white" keys of a C-major diatonic scale this work gently expands time until it takes on the expanse of a horizon. The aesthetic sparsity that Morton Feldman used to make audible the abstract paintings of Mark Rothko or Philip Guston become the raw material of a shimmering landscape. It is a music that reveals a wind swept beauty without dramatic intent.

The Mathematics of Resonant Bodies is the spiritual offspring of James Tenney's Having Never Written A Note for Percussion as an expansion of the drawing out of enharmonic counterpoint and timbral study teased out by that work. Each movement focusing upon a singular class of percussion instrument using well engineered amplification to tease out the dancing tones that hover in the air within the mass of percussive tremolo. Again, John Luther Adams makes use of an expansive sense of time to compose a music with the expansive density and grandeur of a slowly melting glacier. Freed from the constraints of human drama, the ears are drawn to an aurora borealis of acoustic dimensions. Steven Schick's performance was perfectly tuned to the meditative discipline demanded from a work composed specifically for him. The use of lights and staging expanded upon an already transparent formal construction as Schick moved between formations of snares, triangles, cymbals, a gong, a bass drum and a crank driven siren.
Posted by Unknown at 5:58 PM