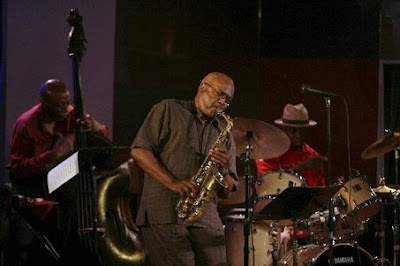 The theme of the fourth night of the Umbrella Music Festival was scorched Earth. As each set featured playing that burned just a bit hotter than the frightening Fahrenheit that preceded it. And wasn't that the heat came with volume - though there was no shortage of that - as it did with the display of raw ability and musicianship that could navigate both within and around traditional jazz forms with the implicit threat of toppling those forms ever present. Much of the deep history of the music was itself embodied by the players themselves in the form of Trio 3. A group with roots reaching deep into the sound itself.

The Nick Broste Trio featured a set of straight ahead writing for bass, reeds and trombone. The progressive surprises lurked around the edges of the writing and improvising of this music as the heads of each tune would take oblique angles as the players themselves were clearly familiar with each nook and cranny of the music. The chemistry between these three was also hard to miss.

The combination of Swiss reedsman Fredrik Ljungkvist, Dutch trombonist Joost Buis with Chicago's drum and bass combination of Mike Reed and Nate McBride was a clear example of the kind of cross-Atlantic collaboration that the Umbrella Music organization takes much deserved pride in. These players take raw sound and fearlessly push each other creatively to explore uncompromising heights through improvisation. Their set of free material could have easily become unhinged in the hands of less experienced and capable players. The give and take moved steadily toward more "take" as they fearlessly piled on exquisite layers leading up to some screaming clarinet from Ljungkvist. It was a tremendous thrill ride.

Trio 3 then took to the stage long before the dust had settled from the previous set. One could feel the energy of the packed house at the Hideout change as the reverence toward the lifetime of musical accomplishments of Oliver Lake, Reggie Workman and Andrew Cyrille was palpable. Along with a disbelief that all three could be present in such an intimate venue. Then they positively peeled the paint off the walls with their playing. In a festival that brings so many genre-bending performances that vary between free improvisation and reading from charts, Trio 3 presented a forceful reminder of just how much potential and freedom can be mined from a creative approach toward the blues and other blistering interpretations of form. These veterans of jazz were well beyond the terms "titans" or "lions." They are master musicians clearly stating a case for a music's past, present and future as an organic whole.
Posted by Unknown at 11:04 AM