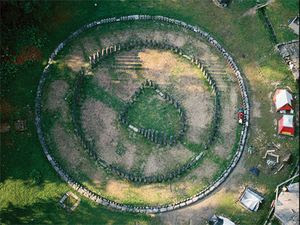 With timbre constricted to anything between a bass saxophone and a soprano saxophone the focus of the evening shifted to spatial arrangement. The alternative performance space presenting the listener with an alternative arrangement. The performers surrounding the outside with roughly one saxophone quartet spread along each corner of the large square room and the audience seated in the middle of the space. Gino Robair occupied the middle of the room as a conductor with every member of the audience facing away from him. So ingrained is the instinct to face - and view - the source of live sound that many in the audience would swivel and turn their heads to see the proceedings so carefully composed to surround.

Jon Raskin's The Sax Cloud offered up a surprisingly quiet mist of saxophone texture. The graphic scores inspired by the ariel photographs of ancient sites by Georg Gerster allowing for a cascading range of creative interpretation. The conductor exercising both a creative and coordinating role as he paints with sound while attempting to keep the room sonically in balance. Within each sub-quartet there was a designated "leader" using a predetermined set of hand signals to coordinate the materials at hand. The prolonged texture of restraint was indeed cloud-like with its complex interactions of pressure systems and sonic ecosystem of evaporation and precipitation.

The second ambitious work on the program, Steve Adams' Integral Cloud Frame, built outward from a set harmonic frame that ultimately opened up to allow for improvised bursts and short periods of melodic development. A beautiful piece that was also striking in its restraint. The illusion of movement between stationary players was striking and similar to the illusion created by stationary speakers within a surround system.

The potential for spectacle and the anticipation of loud sound masses from so many performers was never realized. These compositions were thoughtful and surprising in that regard. The compositional ideas were worked a little thin with each piece filling the span before and after intermission. So much prolonged constraint did build up a need for some kind of cathartic release. That communal moment that happens in a performance of the Sun Ra Arkestra where the members of the band circulate within and throughout the audience as they play. Something to break the dreamlike suspension of hovering at such a high altitude within so much tranquility. The levity and whimsy of Henry Brant's spatial works was conspicuously absent. Hovering within a saxophone cloud formation does offer a great deal of beauty on its own. I was left waiting to soar.
Posted by Unknown at 11:21 PM