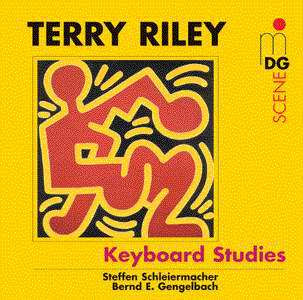 Electronically aided interpretations of the early Terry Riley compositions as a labor of love. A love of the static textures and pulsating beauty that erupts through the fine details of repeated patterns sliding apart from one another. Listening to this music is an indulgence and nod to the minimalism that glittered and attracted my ears toward a life in music. The Hommage piece takes the vocabulary and passion for minimalist keyboard works and paints a sonic portrait with it. Brush strokes that are unapologetic in their direct nods toward Piano Phase and Moonshine Dervishes. Sonically pleasant while formally less pure than the Riley works. Still an indulgence, just the same. 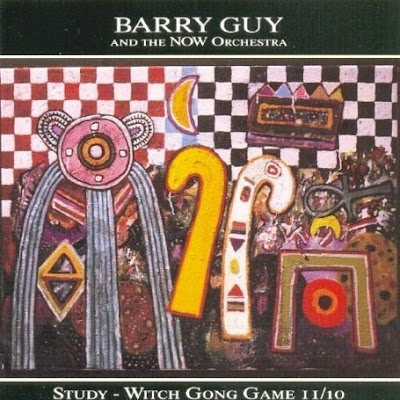 A large ensemble applying sloppy, drippy brush strokes and paint splatters to the canvas of time. Running in close parallel to a score using graphic notation to guide the collective improvisation (Witches Gong II/10 being that score). As Barry Guy puts it:

WGGII/10 utilises various "signs" that feature in many of Alan Davies paintings. The signs jump ship from the painting to a new life, designating musical archetypes. These are planned to give an array of possibilities and allow the director to layer material and set up various polyphonies as well as leaving open spaces for improvisations. Crucially, this score presents musical possibilities on one "landscape" page, obviating the need for page turns as in a conventional score.

Sonically, it is a richly rewarding listen. A testament to both the composer/performer/director finding allies in a large ensemble of supremely talented players. The much shorter Study is fascinating take on group improvisational textures that is well worth its inclusion here. A big, joyous blast of sound from the ensemble formerly known as the New Orchestra Workshop. 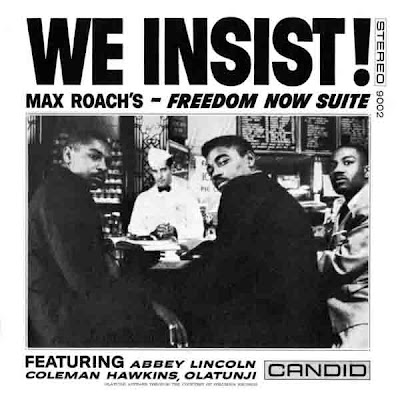 A week that found the GOP senate candidate from Kentucky stupidly weighing in on the Civil Rights Act of 1964 is as good a time as any to revisit the voices and righteous expressions of the movement that confronted - and ultimately defeated - Jim Crow. Composed for the occasion of the centennial of the Emancipation Proclamation, this is a music that contrasts the deafness of Rand Paul's ideological stance. The image of of the sit-in at the lunch counter speaks far more truth than the shallow Libertarian assertion that businesses shouldn't be forced not to discriminate. It's only after more than four decades of the Civil Rights Act becoming law that the notion of a free market "self-regulating" or "evolving" beyond racist policy can even be naively expressed. Without regulation of businesses there would be no 40-hour work week, no barrier to the practice of child labor, no recourse against harassment and discrimination, and the vile practice of Jim Crow laws would be alive and well. Rand Paul's clumsy back peddling from having his vapid ideology exposed rings even more hollow compared to the substance and history of this music. This was a real struggle and it was one so undeniably on the right side of history. A musical expression of something true. More than enough vitality in this sound from decades ago to shame a would-be senator. We are fortunate to have this expression from Max Roach along with the great ensemble of musicians (including the "Prez" on tenor) preserved for the ages.
Posted by Unknown at 11:29 PM

Somehow, I've never heard of that Terry Riley/Steffen Schleiermacher recording. Thanks for blogging about it.