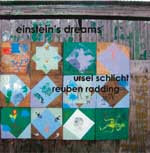 The distance between technique and extended technique as well as the distance between collective neurons is strikingly small as Schlicht and Radding bend the improvisational continuum into a relativity Einstein only dreamed of. This is where the artistry of working within the piano is without novelty as the sonic terrain of strings and strings offers no barrier to the free flowing ideas of these creative musicians. One can hear each player listening on this recording. The duo improvisation at a refined, deliriously musical state. Music that stands up to repeated listening.

Music from an imaginary space populated by angst and amplification. The distance between Krauss's brain and the sonic reality on this disc reduced to a cellular exchange between idea and microscopic reality. Like so many discs in my collection it feels like this one should have been more widely heard a full 10 years after its release. Though it's a rich substance that doesn't digest easily in most ears. It is an honest music realized without compromise and a startling use of recording studio techniques.

As the ears have adjusted to the manipulations of Elliott Sharp's universe through multiple listenings to this disc (it is a staple in the HurdAudio rotation) the rough edges and sonic abrasions have become readily accepted and even actively sought out. The startling details giving way to the forms that emerge from these textures. And the forms are solid and enduring. The title work being a study of manipulating solo string sonics into something brittle and harsh and rendered beautiful through its ugliness. An urban sensibility turned toward sound. A sound that feeds an ongoing addiction.
Posted by Unknown at 6:41 PM