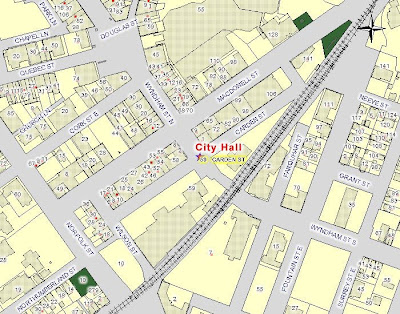 "It has been exactly one year since we last spoke," Casey Sokol greets me from a street corner as he momentarily takes one hand from his accordion. He is just over 15 minutes into a 45 minute performance that traces a path through the streets of downtown Guelph, Ontario. "I've been trying to see if I can maintain the same tempo for the full 45 minutes... but I think that idea is probably a lost cause at this point."

His assigned handler scans the sidewalk, looking for members of the public to offer programs that explain the Acoustic Orienteering composition now under way in the center of this progressive university town. Fourteen other musicians are currently walking their own independent paths as their improvisations occasionally mingle within the air across streets and crosswalks. "You might keep better time if you ignore the crossing signals," I offer, less than helpfully. The handler begins to look impatiently at the time. The Acoustic Orienteering composition will require him to round the corner of Cork and Wyndam Street soon.

"The first thing they told us at rehearsal was to not get hurt." Safety being embedded into the fabric of this public performance. Each performer shadowed by a handler to help explain the artistic intent and run interference with the unsympathetic drunks unsympathetic to free improvisation as they stumble out of the bar. Before I can reply that "good music is often fraught with danger" Casey Sokol resumes his playing and rounds the corner with his handler. Folded into the strains of the Guelph Jazz Festival activities threaded into the urban fabric.

A little later Paul Dutton comes strolling toward the same corner. The sound poet is shadowed by both handler and a television camera as he performs with his voice. Without these companions one might think he had just escaped from an asylum. Trumpeter Gordon Allen pauses late along his route to play a few impromptu choruses with a street musician strumming his acoustic guitar by a store front. Jean Derome explores the acoustic properties of buildings and concrete barriers with his saxophone all along his route. Allison Cameron adding the battery powered sounds of her curio as Tania Gill walks along the opposite side of the street with a melodica.

The experience is friendly and whimsical. Similar to the High Jinx performances that are part of Baltimore's High Zero Festival. But there is a decidedly Canadian quality to Acoustic Orienteering. While High Jinx is about exposure through confrontation - often with the intent of creating discomfort within social spaces - the Guelph approach goes to great lengths to incorporate itself within a civil society. The predetermined paths for each performer is a composition designed by Michelangelo Iaffaldano and Scott Thomson. The handlers are there to soften the interface between musician and the public. The reception ranges from curiosity, indifference and mild annoyance. While those who have been attending the concerts and panels from the rest of the festival form small pockets of audience that sometimes form into small parades. The experience is decidedly communal for those of us familiar with the players as we use the program notes to track their progress.
Posted by Unknown at 1:42 PM

Thanks for another perspective (and a very thoughtful one at that) on a piece where it is impossible to experience everything that happens. To clarify, though, it is my composition; Michelangelo just helped me with some of the design. I find it interesting that you characterize the experience as a "friendly and whimsical" one -- which in ways it certainly was. As the composer of a piece in this series of 'cartographic' works, I tell players _where_ to play and _when_ to play, but not _what_ to play. As such, the content to which such adjectives must apply must be that of the players themselves. I'm very happy to have (for the most part, intentionally) chosen players who performed in a friendly, whimsical and, above all else, musical way.