Bringing the Bisbee Deportation to the Red Room 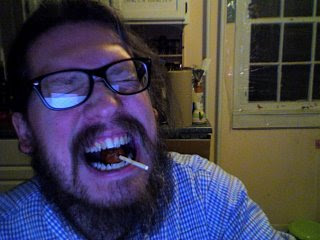 
In 1917, more than 1,300 striking miners were rounded up, kidnapped from Bisbee, Arizona by vigilantes representing the mine owners and deported out of state to Hermanas, New Mexico. The United States v. Wheeler decision of the Supreme Court that followed in 1920 determined that the freedom of movement of U.S. citizens was not constitutionally protected. This became the precedent applied toward the internment of Japanese-Americans during the second world war.

With blindfolds on, Shelly Blake-Plock, John Dierker and Amanda Vickers explored restricted freedom of movement with a sensory deprived approach toward free improvisation. As an experiment, I experienced this music with the willful decision to close my own eyes to occupy the same head-space as the performers.

This was followed by some arrangements of Union songs from the era, and a peculiarly effective "audience participation" piece set as accompaniment to an archival home movie documenting one Japanese-American family's internment in Topaz, Utah.

The intermingling of free improvisation with folk tunes and audience participation continued into the second set, culminating in a free improvisation take on a game of musical chairs that added a new performer from the audience each time someone was left without a chair. The tension of getting a group of free improvisers to "stop" playing growing more tenuous as the number of players grew.

The mix of labor history and its associated politics, free improvisation, folk song and social participation achieved a remarkable balance of reverent whimsy. Proving that deep ideas and serious intent can also be fun and unpretentious. Shelly Blake-Plock flashed an unassuming, comfortable stage presence not often found at the Red Room. And as he astutely observed, he also brought the most complete set of "songs" ever performed in that space. It was his sense of temporal proportions (keeping things short) and responsive improvisational flair that ultimately led to a compelling collection of disparate impulses.
Posted by Unknown at 10:59 AM

I vote for Shelly Blake-Plock!