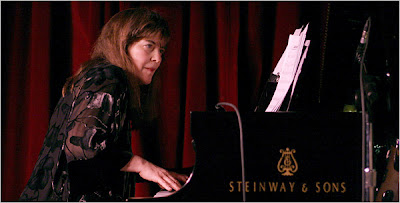 "I believe her music will be considered required listening by future students of exploratory creative music. Having the opportunity to work with this most special musician has helped to open my own musical universe in every way. With Marilyn I am free to introduce march music, totally notated pieces, no music or vertical harmonic music -- she can execute in every area (and even more importantly, she creatively contributes). Her work will be seen as one of the models for the next time cycle." - Anthony Braxton, August 1989

Braxton's generous statement rings more true than ever as Marilyn Crispell has continued to add more texture and material to her amazing improvisative voice at the piano. With an added sense of lyricism and melodic focus and an uncanny ability to spin fantastic spontaneous creations out of simple component parts, Marilyn Crispell is a substantial creative force in the current time cycle. Required listening for anyone studying creative music and intensely rewarding listening for anyone who loves hearing the continued evolution of jazz piano music.

In the first of two sets, Crispell featured her melodic side as she built remarkable tension out of tasteful restraint. Single lines and singular gestures gave way to open piano voicings built up from the middle-low register of the instrument as she effortlessly picked out exquisite harmonies from just a few well-placed notes. The whispers of melodies that she added to her textural vocabulary with Amaryllis and Nothing Ever Was, Anyway has since been folded into the range of sounds at her finger tips as the Marilyn Crispell of the current time cycle is one of breathless extremes in the service of intuitively pristine formal constructions. At the core of this music remains the prayerful tone of John Coltrane's "Dear Lord" that served as an early inspiration and signature tune for Crispell.

The second set featured a satisfying return to the cluster-rich, spiky free improvisations that had such a strong pull for these ears when I first discovered her music. The percussive precision and clarity of her forays into the registral and textural extremes of the instrument growing organically from sequences and gestures that would return and remain prominent through much of her improvisation. The understanding of just how explosive and controlled her sound is with such an expansive set of materials does indeed make her the model of improvised music that Braxton recognized her to be.