Around the Blogs: Afro-Futurism and the State of Race in Creative Improvised Music 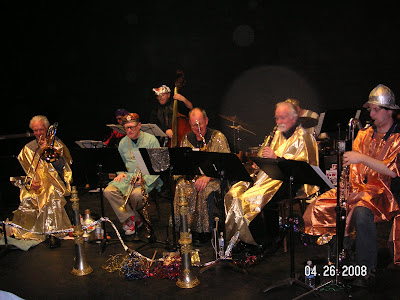 While a love of Sun Ra is transcendent, the contrast between the image of the tribute band and the current Arkestra is striking. Against the backdrop of an electrifying Barack Obama presidential campaign with all of its progressive promise of positive change and the thoughtful discussion of race in jazz sparked around the blogs by Ethan Iverson's incredible essays over at Do the Math on difficult questions about Lennie Tristano, Lee Konitz and Warne Marsh. Read the whole series of essays. 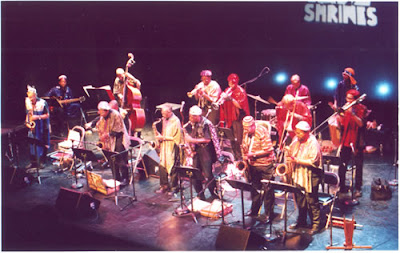 Tristano's claim as an early pioneer of free improvised music has long been a curiosity for me. Approaching his music as belonging to the tradition of Conlon Nancarrow and Charles Ives - as Iverson concludes to be more appropriate - does place his music in a profoundly different context. Stanley Crouch's assertion that Tristano's turn toward European traditions (at the expense of the African diaspora) did little to advance jazz reinforces this uncomfortable segregation of Tristano into the "American Maverick" tradition. As one who loves the musical traditions of Charles Ives and Thelonious Monk with equal affection this conversation raises multiple points about how the complex history of immigrants and emancipated slaves is reflected in the development of the arts. And in particular how the injustices and biases carry over into how each tradition develops relative to one another. Sun Ra - whose role as an early pioneer of free improvised music is more compelling than Tristano's - may have completely embraced the persona of a being from Saturn in part as a reaction to the ugliness of racism in the America in his day. His music is compelling to the point that I'm inclined to believe he really was from outer space.

Soundslope writes about the Xenogenesis Suite by Nicole Mitchell. Written as a tribute to the writer Octavia Butler, who was another voice of the Afro-futurism associated with Sun Ra. I have this disc on my shelf already and it's cued up to enter the HurdAudio Rotation.

And bouncing back to the "Maverick" tradition, Alex Ross draws my attention to the music of Johanna Magdalena Beyer. An early twentieth century composer I should have learned about (and already be obsessed with) long ago. Anyone from that era associated with Charles Seeger and his "dissonant counterpoint" is someone these ears are hungry to hear. I imagine this New World double-CD and this New Albion disc are a good place to start.
Posted by Unknown at 10:50 PM