Music in Black and White: Sonic Cinema Served Up by Relache 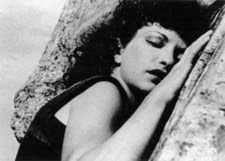 The sparse and intense music of Teiji Ito was a revelation to me. As the music originally scored for The Very Eye of Night and Meshes of the Afternoon was lovingly restored and re-scored for the Relache instrumentation the austere beauty was a natural fit for both the dancing figures against a night sky in Night and the surrealist story telling found in Meshes. After the intermission, there was a reprise of The Very Eye of Night, with Kyle Gann's music performed instead of the Ito heard earlier. The difference of image and music juxtaposition was stark and startling. Where the spaciousness of Ito's music brought out the sense of the infinite of the star-filled sky Gann's pulsing rhythms found a natural visual ally in the ballet on screen.

Any chance to view At Land with its cast of John Cage, Maya Deren and Alexander Hammid is a welcome glimpse into a wonderful era of avant garde creativity. Anything with John Cage and chess boards triggers a sympathetic pull for my attention. The music composed for this film (originally conceived of as a silent film) by Chuck Holdeman offered a respectful layer to the experience that held up well in performance.

The final two films, Dream of a Rarebit Fiend and Beggar On Horseback were a departure from the focused vision of director Maya Deren and the music took a sharp turn toward the more slap-stick humor one associates with silent film scores. The footage of these rare films was fascinating and I'm curious what a more deliberately experimental or expectation contrasting score could have brought out.
Posted by Unknown at 8:04 PM