"For the sake of the exquisiteness of emotion which music may express, as well as for the sake of perfection of the music itself, therefore, there is a place for the formalization and co-ordination of different contemporary musical resources by means of their common relationship with the overtone series, which, although it forms a mathematical, acoustical, and historical gauge, is not merely a matter of arithmetic, theory, and pedantry, but itself a living essence from which musicality springs."

So concludes Henry Cowell in the final paragraph of New Musical Resources. After reading so many other composers refer to this work it was good to read the source directly. (I really must read the Michael Hicks biography of Cowell - I've heard such good things about it)

The attraction of the overtone series as harmonic resource has undeniable pull. The history of music - and more accurately - the history of intervals being added to a growing pool of acceptable "consonances" almost cuts a clean path upward through the harmonic series. So much so that serialist composers would often point toward the "dissonant" harmonies used in their compositions as being at an advanced point along the overtone series. Even Henry Cowell himself argued that the dense harmonic "clusters" could be found - 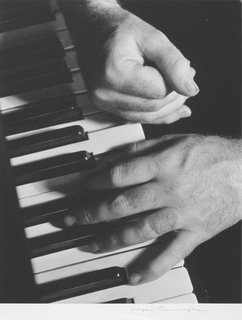 and perceptually comprehended - as intervals found in the upper partials of this "natural" foundation. In one sense this is a safe argument as any interval can be found in the harmonic series. It is theoretically infinite and contains all intervals. The other part of the argument - that "dissonance" equals either evolutionary or revolutionary advancement that is sonically "ahead of one's time" is suspicious. But I don't think that is the argument that Henry Cowell puts forth.

Parts I and II deal with harmony and rhythm respectively. The prose is a little clumsy - but this is often the case when trying to bend words toward explaining one's relationship to sound and ideas. There's a feeling of familiarity here as Cowell mirrors my own approach to these parameters in many respects and I enjoy reading this much more than I'd anticipated.

Part III focuses on "chord-formation" and here Cowell lays out the logic and creative path that leads him to the use of tone-clusters. It is here that he explicitly draws upon the "upper partials" argument for the cognitive comprehension of tone-clusters. (Though in reality, the thick, aggressive beauty of tone-clusters is all the justification one should ever need). And he goes on to make a case for substituting major and minor seconds for the equivalent thirds in tonal/tertiary harmony. This reminds me of Arnold Schoenberg's Kammersymphonie and how fourths are used as the chordal building blocks as a substitute for thirds. Whether one swaps out fourths or seconds, these two composers wrote some fantastic music with this approach.

The piano was Henry Cowell's primary instrument. And the quality of his piano compositions is enormously enduring. I admire his formal explanation for developing a piano technique that calls for elbows and fists on the keyboard. By building a harmonic system of major and minor seconds for tone-clusters he collapsed the intervallic chordal basis about as far as one can go with this instrument before re-tuning the beast. And as such he came up against the same problem with harmony that drove Schoenberg to his "crisis" period shortly after the Kammersymphonie. The choice of substituting seconds or fourths for the more common thirds was motivated by a search to open up new harmonic territory. And it takes very little time to exhaust the possibilities of every interval when there are so few to choose from. This realization is what drove Schoenberg to develop his tone row technique. But the "new musical resources" of the overtone series suggested by Cowell points directly toward a more intuitive solution.

Looking to the overtone series as musical resource I am struck by just how different the intervals are there compared to the paltry set of approximations in 12-tone equal temperament. One has to travel a long way up the series to find two partials exactly 100.00 cents (minor second) or 200.00 cents (major second) apart. And cognitively, our auditory systems probably accept these intervals for the 16/15 (111.73 cents) and 9/8 (203.91) in most contexts. But imagine a more dynamic tone-cluster composition that makes use of multiple tunings for major and minor second intervals. Something that opens the ear to the fluctuations of tones as a primary focal point. This is an area where one can build upon Henry Cowell's ideas. And it's his thinking about tone clusters that is particularly well thought out in this book.
Posted by Unknown at 3:37 AM

Since I'm not a practicing musician, I never finished New Musical Resources. But the Hicks bio was compelling.