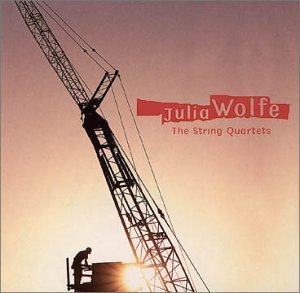 Women's History Month at HurdAudio continues this evening with an active ear applied to The String Quartets of Julia Wolfe released in 2004. There are three string quartets in this collection, and only one of them is actually new as "Four Marys" and "Early That Summer" were previously released on arsenal of Democracy, which I looked at earlier this month. ("Four Marys" is also included on the excellent Cassatt by the Cassatt String Quartet.) However, it is worth having these three pieces assembled on one disc to evaluate the great compositional voice Wolfe has applied to this medium.

"Dig Deep" is performed by Ethel. (Ethel having the odd distinction of being an ensemble of two violins, a viola and a cello that insists upon not being called a "string quartet.") This piece opens with a stabbing slab of harmony that sets up a pulse of intoxicating dissonance. Quick figures dart in between stabs, particularly when the pulse lets up for a "breath" allowing for other musical ideas wash over the top. Ethel does an excellent job of "attacking" this performance. There's a relentlessness to this piece that I admire. It's an intensely attractive sonic texture that remains static as the frequent variations in the details and harmonic development hold my interest.

"Four Marys" opens with a quiet drone texture with parts changing independently between loud and soft as the sustained pitches drift. This texture grows organically like a vine as new gestures and melodic lines spring up like blooming flowers.

"Early That Summer" opens by alternating between a soft, rapid pulse in the higher register and a loud, aggressive, rapid pulse that fills out the frequency spectrum. This material then develops by adding new material and varying it while sustaining it aggressive rhythmic thrust. The hocket patterns between the violin and cello are particularly effective. I also appreciate how individual parts will introduce pulses moving at a different rate against the group pulse (such as the cello part playing quarter-note triplets against the eighth/sixteenth note patterns) or else the entire pattern will slow down ensemble-wide with occasional bursts of the original rhythm appearing from time to time. This is sonic texture formed by fusing the group into a single sound as individual parts rarely sustain independence for long. My ears are drawn to the harmonic progression that colors this loud piece. The soft coda of sustained tones pulls this composition to a satisfying and creative conclusion.

These are three great string quartets. Julia Wolfe has developed an aggressive sonic vocabulary that "rocks" this medium. I hope that she completes a long cycle of many works for string quartet over the course of her career.
Posted by Unknown at 12:06 AM