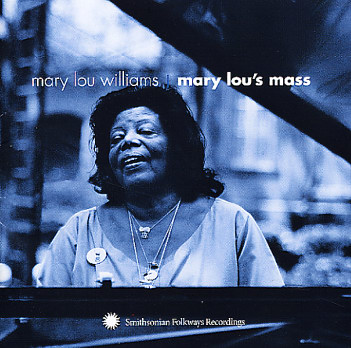 After suffering from a debilitating spritual crisis in 1954 Mary Lou Williams turned toward Roman Catholicism and soon formed a deep sense of faith and identity that carried over into her music. The music of Mary Lou's Mass are expressions of faith ranging from affirmation, spirituals and politically laced commentary.

This listening experience opens with the piano-centric "Willis." The pulsating electric bass lines and percussion part lend a funk edge to this piece.

"O. W." then startles the ear with some light, wordless vocals. Eerily in-tune (for vocals) with some great instrumental counter-lines from flute and trombone that fill out the texture as the piano holds down the harmonic and rhythmic framework.

"Act of Contrition" opens with a great acoustic bass part that sets out a carpet for some sultry, quivering, soul-drenched vocals by Honi Gordon over Williams' piano. It's the sound of prayer in a jazz language that appeals to my listening sensibilities.

"Medi I and Medi II" breaks up a series of up-tempo vocal works with an instrumental blues that starts slow before breaking into a full-on groove. The flute lines by Roger Glenn are particularly satisfying in the slow tempo portions of this track. This is the language of jazz prayer uttered without words.

"Lamb of God" is the highlight of this listening experience. Here Williams composed some rich choral textures using a sampling of avant garde vocal techniques to paint a thoroughly modern take on this traditional text. The tight harmonic clusters in the choir give this an other-worldly sound and are thoroughly attractive to my ears.

There is no doubt that Mary Lou Williams' spiritual convictions ran deep. She was clearly applying her considerable talent as a pianist and composer to express some sincere and hard won beliefs. Stylistically, this work spans many different strains of jazz music from straight sprituals to hard bop. These short compositions range from transcendent flashes to occasionally preachy settings of doctrine. There is plenty of sanctuary to be found in the instrumental tracks on this disc as they allow Mary Lou Williams's piano work to shift into focus.
Posted by Unknown at 12:51 AM