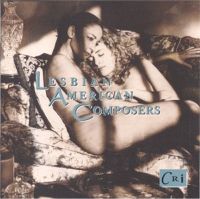 For tonight's chapter of Women's History Month at HurdAudio I turn my ears toward the 1998 compilation from the now defunct CRI label of Lesbian American Composers.

"Poem of Change" (1992) by Pauline Oliveros. Scored for voice, accordion and tape. I've always been fond of Pauline Oliveros' music and ideas. Her "deep listening" approach to improvisation, meditation and listening is particularly valuable to me. "Poem of Change" is an intriguing juxtaposition of text (by Oliveros) musing on the need for changes in sexism, racism and other injustices with accordion and recorded sounds from the World War II era. The calm delivery of the text (that is often whispered) and the sparse drones of the accordion punctuated by the sound of warfare are well matched. This is a rare case where the concrete meaning of the text serves and is served by the abstract qualities of the composition. One feels the optimism in the determination of the voice while also feeling the despair of the prolonged struggle against history.

"Raw Silk (A Rag)" (1994) by Nurit Tilles. Scored for piano. This is a piano rag cut from a sophisticated harmonic fabric. There are several tempo fluctuations as this piece breathes through variations in density while sustaining harmonic clarity.

"Portrait of Sappho" (1997) by Linda Montano. Scored for voice, electronics and piano. With a text depicting the physical makeup of the body set against soft piano and a pulse like a heartbeat this is a meditation on the nature of mortality. The influence of Pauline Oliveros is readily apparent. But this piece seems to be plumbing a completely different type of meditation. The austerity of it is beautiful and yet this work feels remote.

"Barbie's Other Shoe" (1997) by Lori Freedman/Marilyn Lerner. Scored for half clarinet and piano. I've had the pleasure of seeing Freedman play a "half clarinet." This piece grooves with some open spaces for the "removed" sound of this dissembled instrument that draws from the experience of a four year old girl who's Barbie has lost one shoe.

"I Want to Live" (1997) by Paula M. Kimper. An excerpt from the chamber opera Patience & Sarah scored for two sopranos and orchestra. This piece sounds recognizably operatic and is extremely well arranged. The vocal lines flow well against an exquisite and balanced orchestral accompaniment. I would love to hear this work in its entirety.

"Wolf Chaser" (1995) by Eve Beglarian. Scored for violin, wolf chaser, percussion and electronics. This work is the highlight of this listening experience. A wolf chaser, according to the CD booklet, is a tool made of whale baleen for scaring wolves in the arctic. I assume that it is the sound that starts out this composition. The appeal of that sound is clear as the rest of this composition grows from that rapidly panned (as if being spun) and breathy growl. This sound is electronicly manipulated and enhanced. The violin is tuned to match the source sound and the quality of growl/buzz is maintained throughout this work. The violin timbre seems to grow organically from the soundscape.

"running the edgE" (1996) by Jennifer Higdon. Scored for two flutes and piano. After an explosive opening gesture the piano plays rhythmic passages on muted strings while the flutes spin lines over the top. Soon piano strings are strummed as the flute lines thicken up. This is a chamber work with great contrast and momentum. The extended piano techniques are a great match for the flute parts.

"I Give You Back" (1993) by Annea Lockwood. Scored for solo soprano voice. A poem of pain and anger delivered through a prism of late twentieth century "classical" vocal technique. Sometimes the clear tones ring a bit false against the anguish of the words. At other times the sliding tones and wide dynamic range are a perfect match for an emotionally charged lament.

"Winter" (1997) by Madelyn Byrne. An electronic composition. This is a sound sculpture composed from the manipulation of the sound of bowed crotales and voice (the text is a poem by Basho).

"SUM (State of the Union Message)" (1973/revised 1997) by Ruth Anderson. A collage (electronic) composition. "SUM" is a time capsule made up of brief sonic artifacts from early seventies commercial broadcast television. The rapid, and largely linear, juxtapositions and repetitions reveal a perspective on American culture that is rich in humor, irony and familiarity.

This is an impressive collection of creative works. Sonically it forms a well programmed and diverse concert of "new" music. I will need to further investigate the aesthetic and creative output of many of these composers more deeply as I continue to expand my personal music collection.
Posted by Unknown at 11:03 PM