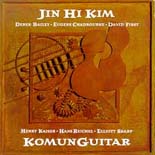 Women's History Month at HurdAudio progresses forward today with an active ear tuned toward KomunGuitar, a series of improvised duets and solos featuring Jin Hi Kim recorded between 1991 - 1993. Kim plays the Komungo, which is a movable fret string instrument that dates back to 4th century Korea.

"Point" is a duet with Elliott Sharp on electric double-neck guitar bass and saxophone. Sharp opens this improvisation with sustained tones that slide around the plucked material on the Komungo. After this texture runs its course Sharp begins to explore some similar meandering lines on a soprano saxophone. This piece progresses with a calm intensity as these two performers seem to grow closer to one another in timbre and sonic gesture. Kim plays both acoustic and electric Komungo on this track and the electric blends well with Sharp's aggressive sonic language.

"Company" is a duet with Derek Bailey on acoustic guitar. Bailey opens this improvisation with some spare notes and one violent strum before Kim answers in kind on the komungo. There's a wide variety of plucked string timbre and density of material in this improvisation. Each performer seems to feed on the other's intensity level as things pick up from those spare, cursory first notes.

"Vongary Meets Big Foot" is a duet with Henry Kaiser on electric guitar. The opening texture is a beautiful juxtaposition of processed electric guitar tones with low to mid range gestures on the komungo. Eventually these two performers work their way to higher registers on their respective instruments. Kim's playing is exceptional on this track while Kaiser's contribution seems to recede into a flat, non-responsive realm.

"Naby" is a solo for komungo. This piece makes me wonder why acoustic guitars don't have movable frets. There's so much flexibility, nuance and range on this instrument. The microtonal inflections add so much to the melodic contour and strummed chords.

"Howdy Partner" is a duet with Eugene Chadbourne on banjo. Timbrally, the banjo sounds like a close cousin to the komungo. The responsive interaction between these two players is fantastic as they teeter into not-quite bluegrass territory of rapidly executed plucked passages that paint unfamiliar harmonies.

"Yellow Seed" is a komungo solo. It starts slow, with just a couple of notes that are reiterated before adding a scraping sound. The melody unfolds with a few more notes added each time before being set free to explore phrases ranging from one to a handfull of notes and gestures. Eventually this continuity-rich building gives way to greater and greater freedom of content. Strummed chords are added as are some brief moments of rolling, pulsating lines.

"Gut Morgen" is a duet with Hans Reichel on electric guitar. Reichel sets up a texture of rapid muted tones against which Kim strums and develops a matching hue. These two performers respond well to one another as they slow things down and open up the prevailing texture while remaining focused within a fairly narrow frequency range. The aural focus drifts naturally between these two instruments.

"Slow View Picnic" is a duet with David First on electric guitar. Here Kim plays the electric Komungo throughout as each performer seems to be emulating the sound of the other to the point where it's sometimes hard to distinguish between these instruments.

Each of these pieces sounds like an excerpt as the larger arc of a live improvised experience feels conspicuously absent. Even so, it's a real pleasure and a revelation to hear this virtuoso on this unfamiliar instrument paired up with so many different master guitar improvisers.
Posted by Unknown at 9:50 PM