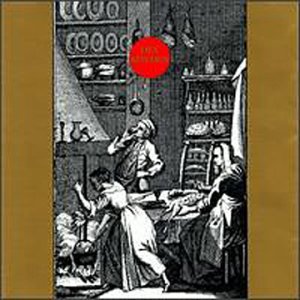 We're in the thick of Women's History Month now at HurdAudio. Tonight I turn my attention to Ikue Mori's Hex Kitchen from 1995.

This is a challenging listen, but thoroughly rewarding. Ikue Mori plays the drum machine and digital sampler (and occasionally sings) on all tracks while some of the finest improvisers of the downtown New York scene sit in on several tracks.

"Slush" kicks off this listening experience with a solo for drum machine and sampler. Heavily processed loops of differing lengths are presented sequentially with smooth transitions between them. Some of the loops slide into a soupy, sloshy mix while others leave the sampled percussion instruments exposed. Dance friendly rhythms are quickly subverted by subtractive/additive processes.

"Woke Up Aghast" adds David Watson on bagpipe and Hideki Kato on bass. The opening timbre sounds like bagpipes and vacuum cleaners. Mori then begins singing in Japanese as a groove emerges from the sound. Like "Slush," grooves are quickly subverted into a soupy sonic texture. The bass holds things down as the bagpipes emerge as a dominant timbre. As rich and varied as this sonic texture is this piece retains an element of whimsy.

"Angler Fish" features Catherine Jauniaux on vocals, Zeena Parkins on electric harp, keyboard and accordion and John Zorn on clarinet. Mori opens up the sonic density on this piece and allows the guest improvisers to paint their own colors. Jauniaux is well mixed into the larger sound with her extended, wordless vocal technique. This is a strange and beautiful sound.

"Shiver" finds Mori playing with Catherine Jauniaux on vocals, Hahn Rowe on guitar and Zeena Parkins on electric Harp. The drum machine sounds percolate on the periphery as Mori sings some lines in Japanese and Jauniaux answers with wordless vocal sounds. There's a particularly nice texture of screaming guitar with faux operatic singing.

"Recipe" is a solo for multiple drum machines. The familiar and cliched sound of the TR-808 "cowbell" sample seems to pop into the frame periodically (often radically pitch shifted) in this pointilistic study of drum machine timbres. It's actually refreshing to hear these familiar sounds in a decidedly non-dance genre. I enjoy the silent spaces between these truncated sounds.

"Loops" is performed with Zeena Parkins on electric harp and Hideki Kato on bass. The bass lines pitted against the odd looping samples are incredibly satisfying. They would seem too abbreviated if not for the fact that there's no textural stasis on this entire disc.

"Kiss of Fire" is credited as a "traditional arrangement" and features Catherine Jauniaux on voice and Hahn Rowe on bass and violin. This is a song realized in Ikue Mori's sonic sensibility. Rowe maintains a steady bass line as the drum machine sounds avoid anything resembling a steady beat while Jauniaux delivers an english text. One can imagine this being the sound of a bar band filtered through the mind of an incredibly drunk/stoned patron.

"Eight Million Ways To Die" features Hahn Rowe on violin and Zeena Parkins on accordion. The aggressive, breathy attack of the accordion seems to trigger waves of electronic avalanches of processed sound from Mori's electronics. The violin sounds fragile against this backdrop with its thin, breath-like bow strokes. Lots of aggressive energy in this piece.

"Clapper" is a work for solo drum machines and sampler. Here the drum samples seem more exposed as the sound focuses in on lightly processed claves, claps, cowbells, digeridoos and toy pianos. There's a strong pulse in this piece even as loops are fleeting.

"Dau Miu" features Jim Staley on trombone. Here the trombone seems to be dueling against a thick texture of noise and Staley is clearly up to the challenge.

"Hive" completes this listening experience with Zeena Parkins on electric harp and David Watson on guitar. Much of the initial texture is a buzz made up of what my ear detects as a highly processed collection of TR-808 cowbell samples. The electric guitar adds gravity to the buzzing sound and seems to transform it, or at least push it toward a series of transitions. Parkins and Watson soon develop a buzz in a lower register from Mori's textures. Then the whole sound seems to morph into a collective sound that quickly transitions and gains intensity.

This is thick, noisy, ugly, beautiful, punishing and sublime music. I'm always amazed at how much detail I can pick out and how pleasant this disc is when I can focus on the music. There's a vibrant, urban intensity to this sound that is irresistible.
Posted by Unknown at 8:47 PM