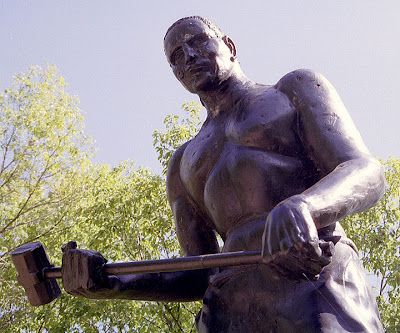 Quintet for solo saxophone and electronics (2005) by Per Bloland
John Ingle: alto saxophone

An evening of soloist plus electronics that frequently brought to mind the legend of John Henry. The legendary steel-driver during the mid-nineteenth century railroad era who challenged a steam-powered hammer to a tunnel digging contest through solid rock. The mighty John Henry successfully beats the machine. But collapsed and dies from exhaustion. The virtuosic challenges presented to the human performers suggested a similar kind of effort to defeat the machine.

The most intriguing offering was the realization of Morton Feldman's Oboe and Orchestra with an electronic realization of the orchestra pieced together by EKG. Credit goes to Kyle Bruckmann and Ernst Karel for recognizing the aesthetic parallels between Feldman's instrument plus orchestra compositions and the soloist plus electronics featured on this particular program. Each note of the orchestra part was realized individually by an analog modular synthesizer (with the exception of the trumpet part, which was realized by recording the them on a trumpet separately). The piece was transformed into something that preserved the abstract qualities of the original arrangement with the live solo oboe serving as the common thread between the two experiences. It is a singularly beautiful piece.

The highlight of the evening was ...sofferte onde serene... by Luigi Nono and expertly performed by Christopher Jones on piano. The accompanying electronic materials consisted of close mic'd recordings of piano that enclose the live piano sound with its amplified counterpart. This resulted in a phantom duet as an expression of loss and grief. The timbral similarities between the live and electronic sounds allowed for a seamlessness between stage and speaker. It is a wonderful composition.

Per Bloland's Quintet for Solo Saxophone and Electronics utilized improvisation to give the soloist a chance to bring the same level of physical aggression found in the electronic materials. Something that definitely took flight given the capabilities of John Ingle to peel off a cascade of notes. Here, the dueling audio sources were well matched.

Monica Scott gave an excellent performance of Mario Davidovsky's Synchronisms no. 3. The electronic bleeps of the old Princeton RCA synthesizer sounding particularly dated and timbrally impoverished along side the richly vocal qualities of the cello.

Clarinet Threads and The Mutiny of Rivers were pieces where, compositionally, John Henry loses the race. The amplification often overwhelming the live performer even as the two parts play out in heroic opposition to one another. Especially heroic given the high quality of performance given by the players on stage in each of these pieces. The electronic and acoustic parts simply played out on temporally parallel planes that felt unbalanced. The question of how one balances the virtuosity of two different mediums left relatively unresolved.
Posted by Unknown at 8:10 PM