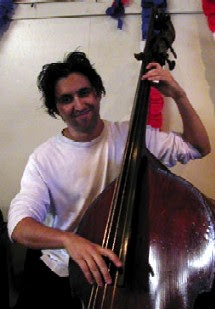 Any concert that concludes with an hour-long interpretation of an Anthony Braxton ghost trance piece is already an above average experience. The 12-tet assembled to plunge into Composition 292 brought exactly the right mix of understanding, feeling and Braxtonian spirit to keep the trance-state bristling with the multiplicity of layers that walk a fine line between structural intent and collective improvisation. The initial sound that erupted from the ensemble sounded so much like Anthony Braxton's recordings (particularly compositions 290 - 299 found on the 9 Compositions (Iridium 2006) box set) that I nearly expected Braxton and his hourglass to appear at the conductor's position before the ensemble. The absence of a conductor facilitating and coordinating the inter-ensemble structures became a prominent quality of this particular performance as sub groups tended to form where players had easy proximity to each other or when good sight lines could be established between performers. The ability of the collective working together without a social hierarchy was a testament to just how well organized anarchy can sound. The pulse structure of the piece remained clear through the swinging lines delivered in remarkable rhythmic unison while still allowing for plenty of deviation and the inclusion of materials from other Braxton compositions to keep the overall texture fluid.

The first half of the concert presented works that draw upon wide interpretive freedoms through the use of alternate notation. The co-mingling of music from Matthew Sperry, Cornelius Cardew and James Tenney tracing a clear outline of sonic ideas from three composers sadly missed. Swell Piece #1 offered up a dynamic outpouring of sustained sounds from a large ensemble that revealed startling details over the course of the simple shape of its overall form. Likewise, Veins offered up a similar transparency of construction that erupted into a beautiful din of joy. The feeling of love for the composer being remembered was clearly audible. The lineage connecting Sperry's music to that of Cornelius Cardew giving a sense of continuity between creative minds.

Placing these particular works along side each other made this concert something more than a collection of "new music" compositions. This music was played with a lot of heart without softening the edges of a sonic world that embraces both consonance and dissonance. These were pieces that invite the performers to collaborate both with the composer's intentions and with each other. And on this particular evening many of them brought their best.
Posted by Unknown at 11:10 PM