An Evening with Evangelista 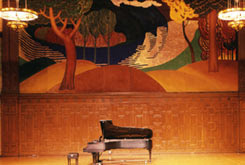 The collaborative duo of Karl Evangelista and Margaret Rei Scampavia (known formally as Grex) presented a suite of short pieces drawing upon a range of stylistic materials. Scampavia shifted from one instrument to the other as Evangelista's electric guitar mined a similarly broad range of sonics. The striking thing about this music was its stubborn refusal to eschew any element in favor of another. There were comfortable grooves along side stretches of pulse-less sound. Textures of song mixed between slabs of instrumental exploits. Musical quotations interspersed within original ideas. Noise co-existing nicely along side tonality. Each offered with a headlong creative urge that made the unexpected turns and sequences into a joyful expression.

Also featured on this thesis recital were brief performances of Evangelista's electric guitar improvisation along with its inclusion in a trio of guitar, trumpet and drum and a brief set from the two-guitar quartet called Host Family that mixed elements of free jazz molded around Evangelista's charts. The range of ideas drawing upon a passionate and grounded sense of materials available to the creative musician was a glimpse of the ecclectic forces being assimilated through a healthy mix of formal study and ear-driven play.
Posted by Unknown at 6:11 PM

Good to have you back reviewing!!