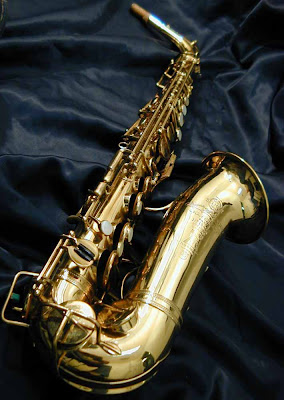 With a muted, yet powerful tone and special attention toward phrasing and accent structure, Charley Gerard and Carl Banner opened these ears to a concert repertoire of jazz and dance influenced works with roots in the early twentieth century.

Opening with the pleasant Cinq danses exotiques by Jean Francaix, the soloist and accompanist established an early balance and lean rhythmic sensibility that carried throughout the afternoon. The tango music of Astor Piazzolla is a deservedly celebrated attraction that received an animated treatment. The music of Darius Milhaud was another draw as I haven't heard nearly enough Milhaud. Dance was just a wisp of a piece from a composer overdue for renewed interest. Gerard's own compositions were humor-laced pieces that make clear use of a variety of influences.

The music of Erwin Schulhoff was new to me, and particularly striking. Charley Gerard briefly touched upon the tragic circumstances of Schulhoff's short life as a jazz pianist in Germany of the 1930's as he introduced the piece. Hot Sonate hinted at what must be a vast treasure of music filled with rhythmic twists and melodic wit.
Posted by Unknown at 11:14 PM