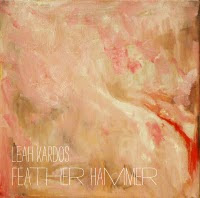 Leah Kardos cites a diverse range of influences that go into Feather Hammer; Bjork, the prepared piano music of John Cage, Amon Tobin, Philip Glass, Terry Riley, Graham Firkin and Brian Eno just to name a few. The qualities of those forebears are crystal clear in the music. And yet there's a complete lack of emulation of any of these musicians standing in the way of the deeply personal sound and identity wrapped up within Feather Hammer. This is a studio recording that carefully crafts a piano-centric world with multiple layers of sonic manipulation. And yet for all its post processing and carefully crafted grooves and textures there emerges this amazingly heavy lightness to the whole recording. The craft and the ideas in this music run deep without overwhelming the sound. It's a startling quality and it's one that invites multiple listening to an expression that explores new directions in studio composition. Leah Kardos is a talent to keep an open ear for. 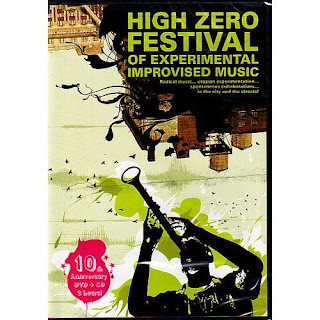 A celebration of ten years of the High Zero Festival in Baltimore released just ahead of the 2008 incarnation of that unique celebration. That year happened to be my last High Zero as I moved out of Baltimore in early 2009. But in my time there I did soak in the vibrant and active experimental improvised music scene and can easily see the beloved Baltimore-isms that this DVD and CD explore. Though I am struck by just how theatrical and dramatic the music from this scene actually is. I hadn't focused on that aspect of it while living there, but the interviews on the DVD and the musical sets drive home the role of theater in this music. Like much of the music, the theatrics is like an antidote to nearly all other entertainment. It is music and theater that revels in its own discomfort factor, rather than being a commodity that is calculated to appeal to a target audience in the way so much media is produced and marketed. The High Jinx street performances are often geared specifically toward knocking the unsuspecting public out of their comfort zone. And the nights and days of concerts that are part of the yearly High Zero experience are often challenging both sonically and socially. And yet every one of those live shows are sold out. There is an audience hungry to be challenged and appreciative of art that doesn't pander. There is, for lack of a better word, a "market" for this music that thankfully evades marketing. The documentation presented in audio and video form here actually falls short of the delirious energy that pulsates through the communal experience of a High Zero Festival. But it does give an honest account of so much of the good that this "fringe" community in Baltimore has supported in this overwhelmingly positive way. 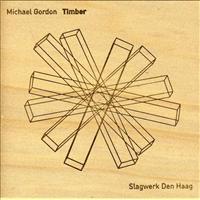 Slagwerk Den Haag:
Fedor Teunisse, Marcel Andriessen, Niels Meliefste, Pepe Garcia, Juan Martinez, Frank Wienk: percussion
I picked up this disc at a live performance of this piece. Harboring some doubt about the recording doing full justice to the visual presence of six percussionists wailing away on two-by-fours with contact mics attached. It turns out that a great piece of music is still a great piece of music even without the idiosyncratic presence of these performers. It doesn't hurt that this one is so well recorded. The near-minimalist formula of carving out a singular timbral space as the sonic universe for an hour long work brings its own unifying qualities. As a study of wood as media, Michael Gordon focuses on rhythm, pulse and dynamics. The qualities that make his compositions so compelling - rooted in the Bang on a Can embrace of totalism and minimalism - are completely audible. In many ways, those qualities are more transparent with the stripping down of timbral materials to such an elemental, percussive sound. It's the amplification from those contact microphones that allows this material to soar. The limited range feels anything but limited given the wide berth of variations that emerge from the microscopic details of vibrating boards. It turns out that the recording packs as much (if not more) thrill as the live experience.
Posted by Unknown at 10:39 PM